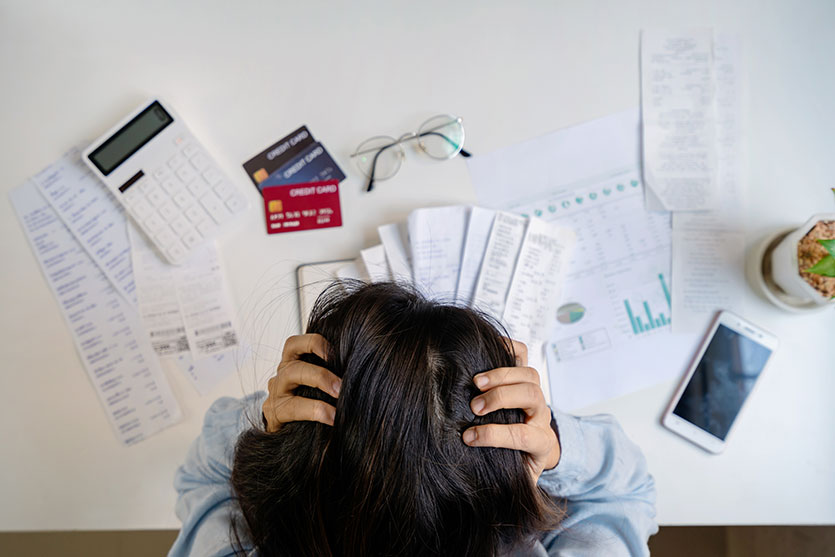 It’s tax season in Canada again, and while some are looking forward to a bit of extra cash in their pockets from their returns, others are worried that they’re going to wind up owing the Canada Revenue Agency (CRA) money, including those who already have outstanding tax debts.

Owing the CRA money is not an enviable position to be in. The agency has strong collection powers that are unavailable to other creditors. Ignoring the problem can also make things much worse, as the CRA can act without having to get a court order to collect directly.

You have to be careful about the relief options you seek out when you owe the CRA. Many of the debt relief programs out there are not accepted by the CRA. That doesn’t mean you don’t have any options, but you have to be discerning about those that you pursue.

A good way to start dealing with tax debt is to book a free consultation with David Sklar & Associates. You will have the opportunity to explain your financial situation to a Licensed Insolvency Trustee, who will then inform you of the options available to you and explain how tax debt relief works.

How Do You End Up Owing Taxes?

There are several ways people can wind up owing taxes through no real fault or wrongdoing on their part. In Canada, self-employed individuals have to remit their own HST. This includes gig workers such as rideshare drivers, and in many cases, they are often not initially aware of this responsibility. Self-employed individuals also have to source their own deductions (such as CPP deductions) and pay their own income tax out of what they earn.

People can also end up owing taxes when they make a withdrawal from their RRSP or draw money from a pension. RRSP investments are tax-deferred, and payments are only due once you make a withdrawal. For some retirees, this may be the first time they’ve ever owed taxes instead of having it deducted from a paycheque, and they may not have prepared financially for that reality. Those relying on a fixed-income pension can also find themselves unable to make those payments.

People working more than one job can also find themselves owing taxes when they file because accurate deductions were not being taken from their paycheques. Splitting income between two paycheques can lead to an amount owing at the end of the year.

Often people who wind up owing the CRA are those most in need of tax debt relief in Canada.

What the CRA Can Do to Collect

The CRA can take several actions to collect amounts owing if you fail to pay them. These actions include wage garnishment, freezing your bank accounts, withholding government benefits and tax credits, seizing assets and investments, and even placing a lien on your home or other property. They can also pursue these actions largely without a court order, unlike other creditors.

Given the severity of what the CRA can do to collect, it’s advisable to seek tax debt relief sooner than later. If you ignore the problem, it is only a matter of time before the CRA uses their broad collection powers.

How to Get Tax Debt Relief in Canada

There are several options for Canadian income tax debt help that depend on your financial situation. You can work with the CRA if you are experiencing financial hardship. They do not offer any programs that reduce the principal amount that you owe, but they can offer payment plans and relief from interest charges and late penalties.

Beyond these programs, Canadians who owe tax debt can also consider consumer proposals or bankruptcy. Although these can seem like drastic measures, depending on the amount you owe, your ability to repay it, and other debts you’re carrying, they can help you get out of a dire financial situation.

Payment arrangements do not provide tax debt relief in terms of the original balance, but if you can afford the payments, they will allow you to avoid more extreme collection actions.

The CRA will not voluntarily reduce the amount of money that you owe them. They don’t have the mandate to provide that kind of relief at their own discretion. However, they do offer taxpayer relief in the form of cancelled or waived penalties and interest.

You could be eligible for this relief if you are experiencing financial hardship and are unable to pay the amounts owing. The CRA can cancel or waive both late penalties and the interest charges that have accumulated over time, leaving only the principal amount that you owe. The CRA lists the following circumstances in which it may provide this kind of relief:

The CRA will require full financial disclosure if you request this type of relief. This includes a statement of your assets, income, expenses, and liabilities. This is a good reason to be careful about making a request for such relief, but if you are genuinely experiencing financial hardship, it may be a worthwhile path to explore.

If relief from interest charges and late penalties are not enough to help you pay the tax debt that you owe, filing a consumer proposal is one of only two ways to reduce the principal amount owing (the original tax debt before penalties and interest are applied).

A financial proposal can substantially reduce your unsecured debts, and it’s not just limited to CRA debt. If one of the reasons you’re struggling to pay your taxes is that it would hurt your ability to keep up with other debt obligations, such as growing credit card bills, a consumer proposal can help you reset your overall financial picture.

A consumer proposal is an agreement to turn your unsecured debts into fixed monthly payments that are more manageable to afford. Interest stops accumulating on the amount, and you may see a substantial reduction in what you have to pay in total. All unsecured debts, including tax debt, can be included in a proposal.

Bankruptcy is another option if you do not have the funds to work out a payment arrangement. If you’re on a fixed income or unemployed, you may not be able to work out a consumer proposal. In that case, bankruptcy can still provide tax debt relief in Canada. However, in a bankruptcy, you may have to give up certain assets to settle your debts.

There are many exemptions to the assets that will have to be sold. If you are considering filing bankruptcy in Toronto, talk to us to find out the details of what you can keep, what you will have to part with, and whether bankruptcy is the best option for you.

Be Careful with Other Tax Debt Relief Options

When you owe money to the CRA that you can’t afford to pay, they may encourage you to borrow money, such as taking out a debt consolidation loan or a home equity line of credit, so that you can meet your obligations. The CRA prioritizes collecting its payments, and while these options can resolve your tax debt quickly, they will not necessarily leave you in a better financial position.

It’s important to note that the CRA will not accept debt settlement plans. They will not negotiate with debt settlement companies, which operate by trying to offer a reduced lump sum payment to creditors. Be careful about the tools and options you consider when you need tax debt relief in Canada.

Owing the CRA can be intimidating, but there are options. If the programs or payment plans available directly with the CRA are not enough to help, talk to a Licensed Insolvency Trustee about other ways you can deal with your tax debt.

David Sklar & Associates Inc.
5.0
Based on 752 reviews
David Sklar & Associates Inc. – Consumer Proposals & Licensed Insolvency Trustees
5.0
Based on 752 reviews
Great experience i was in financial trouble and someone of my friends recommended this company. Cori is a wonderful and welcoming person she did a very good job and came up with a smooth and flexible monthly payment after the reduction. i highly recommend this company. Thank you David sklar and special thanks to Cori.❤️🙏🏻
Jasmine Joseph
22:08 13 Jan 23
Met up with Mr. Jason Sklar to discuss more in person, very thorough and clear. He is very kind and thoughtful, I will be referring anyone with the same situation to David Sklar & Associates.
Ariel Domingo
02:33 29 Dec 22
I was a reck talking yo Jason Sklar was easy comfortable he explained everything and put my mind at ease I would recommend the team od sklar to everyone. I have already talked to my ci workers about them
kevin mcweeney
01:13 22 Dec 22
The team at David Sklar & Associates is fantastic.I worked with Jerry whom not only made - what seemed like intimidating process to initiate at first - comfortable.He made everything transparent and took the time to explain the process every step of the way.He was kind, attentive, and professional. Everything was made straightforward and stress free and we found a solution together that worked.Thanks to Jerry and the team.
Jordie Angiolillo
18:22 21 Dec 22
From day one till the end which is today😁 DavidSklar gave me a 5star service and treatment. And I will 100% recommend him and his Associates. This is the best Christmas present ever! Thank you David! More business to come! Merry Christmas and a Happy New Year!!!
barbee diaz
16:37 16 Dec 22
I FOUND DAVID SKLAR & ASSOCIATES BY GOOGLING "BANKRUPTCY" (EARLY NOV. 2021). ON NOV.4, 2021 I HAD A MEETING WITH CORI NARON AT HER OFFICE AT ST CLAIR ANDBATHURST. HER POSITIVE APPROACH TURNED ASTRESSFUL SITUATION INTO A STEP BY STEP UNDERSTANDABLE PROCESSON SEPT. 23, 2022 I OBTAINED MY AUTOMATICDISCHARGE FROM BANKRUPTCY AND MY CERTIFICATE OFDISCHARGE.THANK YOU CORIBRUCE BURGESS
bruce burg
21:35 02 Dec 22
Jerry was wonderful and provided superb service. He is very knowledgeable, trustworthy, and made an intimidating and shame filled time in my life stress free. I hesitated for a long time to take the next step, but Jerry answered all questions, was patient and made the process effortless. I am eternally grateful, and highly recommend Jerry’s services.
M J
18:41 01 Dec 22
Jerry was professional and was easy to deal with
Debbie Asquith
00:09 29 Nov 22
I was quite nervous and a little embarrassed that I needed financial advice. I met with Jerry Janiec and he was very helpful. He made me feel comfortable and explained everything in easy to understand terms so that I understood what my options were. I would recommend David Sklar & Associates for anyone in my position.
Melissa Blackburn
19:53 17 Nov 22
I was fortunate enough to be referred to David Sklar & Associates Inc. by a family member. Now in the10th month of a Consumer Proposal process, I am very impressed with the organization, professionalism and impeccable customer representation that I have experienced. To this effect, I amparticularly thankful to Jerry Janiec and Rhoda Lewis for their excellent work.
Suzanna Vaclavik
12:21 16 Nov 22
PrevPrevious PostIncome Tax and Consumer Proposals
Next PostWhat Happens To Your Debt after death In Canada?Next